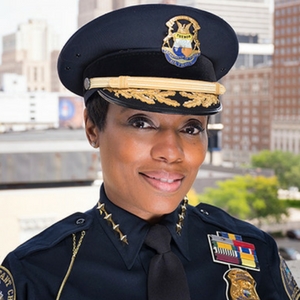 Bio:
Lashinda Stair is 1st Assistant Chief of Police in the Detroit Police Department and the first DPD member appointed to the rank of First Assistant Chief of Police. She is skilled in numerous specialized training areas including the U.S. Equal Employment Opportunity Commission; Michigan Department of Civil Rights on Investigating Complaints of Harassment and Discrimination and  the U.S. Department of Justice Community Policing and Problem Solving.

Disruption:
Changing paradigms to put more officers on patrol. Under Stair’s leadership, the Detroit Police Department (DPD) experienced a major shift in personnel. She was instrumental in creating a civilian workforce for some internal units, such as Records Management, Recruiting, Detroit Detention Center and the 911 Dispatch Center. This allowed the department to return Police Officers to patrol, a significant innovation and cultural change.

Role Model:
As the highest ranking female executive within DPD, she advises and encourages all officers (especially female officers) and actively supports and mentors young people. She’s intricately involved in the DPD’s Women in Blue and Women Behind the Badge initiatives, honoring female officers for their contributions to Detroit. She actively encourages women to consider a career in law enforcement. Through her involvement in Girls for Global Growth she helps young people with the issues of peer pressure, low self-esteem and bullying.

What’s Next:
She’s working to help strengthen the ties between the community and police by disrupting negative perceptions and increasing positive dialogue.

Who would have thought that a little black girl, born on the south side of Chicago to a barely 15-year-old mother, would grow up to graduate from two universities, meet Presidents, Vice-Presidents, Secretaries of State, First Ladies and have the honor of visiting the U.S. Supreme Court for a one-on-one with a Supreme Court Justice! I am humbled by my life experiences thus far, all of which have occurred because I have had individuals throughout my life who supported and cared enough to help mentor me. These life experiences have shaped my perspective on the importance of education and the understanding of self-value and determination. It has inspired me to advocate for all young people; to encourage them to believe in themselves and follow their dreams, so they can one day be leaders in their own rights.